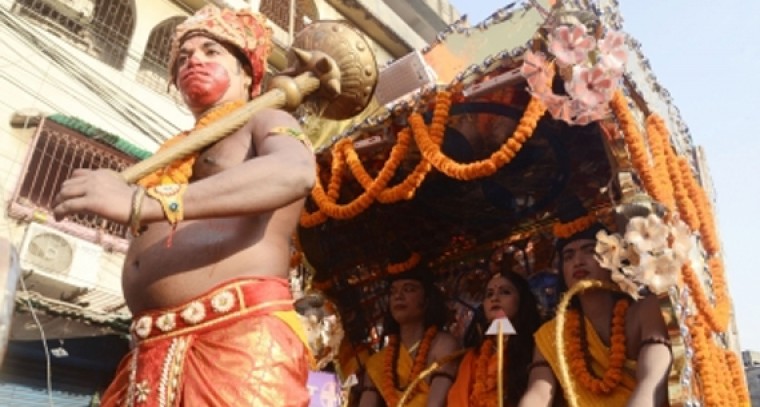 Hyderabad, April 9 (IANS) Elaborate security arrangements are being made for the Ram Navami Shobha Yatra here and in Telangana's Bhainsa, scheduled to take place on Sunday.

With the Telangana High Court on Friday directing the police to permit Shobha Yatra in Bhainsa of Nirmal district, the police top brass were busy making security arrangements to ensure a peaceful procession.

The High Court permitted the organisers with some riders. Justice Kanneganti Lalitha said that Shobha Yatra should be held between 9 a.m. to 1 p.m. The organisers should follow the route decided by the police and also abide by the conditions imposed by them, the court maintained.

The organisers had moved the High Court after the police denied them permission for the procession to pass through certain communally sensitive areas.

The state government conveyed to the court that in view of the law and order situation, permission was not granted for the procession in certain areas.

Bhainsa, about 260 km from Hyderabad, witnessed a series of communal clashes in recent years. Violence had rocked the town in March last year. Communal clashes were also reported twice in 2020.

In 2008, nine people were killed in the riots that broke out during a religious procession.

Police in both Hyderabad and Bhainsa were making tight security arrangements along the procession route. In addition with deployment of adequate forces, the police officials will also monitor the situation through CCTV cameras.

This is to take additional precautionary measures in view of the ongoing holy month of Ramzan.

The court said that the police already permitted the yatra from Seetharambagh temple to Hanuman Vyayamshala School, Sultan Bazar and the petitioners can join this yatra instead of conducting proceedings independently.

The procession starts from Seetarambagh temple in Mangalhat and proceed to Hanuman Vyayamshala School in Sultan Bazar via various places under Goshamahal and Sultan Bazar traffic police stations.

Hyderabad Police Commissioner C.V. Anand said that one tributary procession is from Akashpuri Hanuman temple and will join the main procession at Gangabowli Junction. The procession will cover 6.5 km and conclude at Hanuman Vyayamshala at about 10 p.m.

The police have imposed traffic restrictions at various points along the procession route.