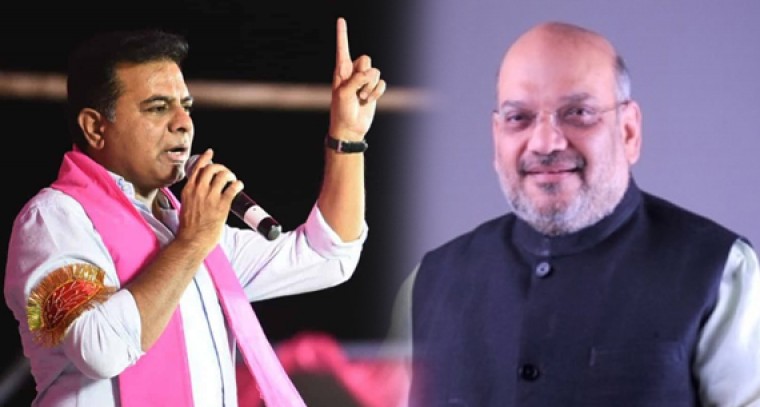 Hyderabad, April 16 (IANS) Telangana is considered as mini-India because of its true cosmopolitan nature and the language sentiments here not being as strong as in Tamil Nadu or Karnataka, but Union Home Ministers Amit Shahs recent statement that Hindi should be the alternative to English for communication among Indians has drawn the ire of all.

Political parties and academicians see this as an attempt to impose a particular language on India though unity in diversity is the country's strength. They warn that this regional chauvinism will boomerang.

Some political leaders have slammed the BJP for what they call its double-standards on the language issue, and dared the party to start imposing Hindi from Gujarat.

The ruling Telangana Rashtra Samithi (TRS) has come down heavily on the BJP for doing politics over language, saying the saffron party wants to decide not only what one should eat and wear, but also the language one should communicate in.

"Why don't we let people of our great nation decide what to eat, what to wear, who to pray to and what language to speak," said TRS working President K.T. Rama Rao, who warned that language chauvinism or hegemony will boomerang.

He also believes that rejecting English will be a great disservice to the youngsters of this nation who have global aspirations.

"Already our students in different states are missing the English language to be competent. While it is the wish and will of citizens to practice what they want, imposition is not right. After Amit Shah spoke, we have seen on national channels many BJP MPs toeing the line of the ?one nation one language' theory. That's more dangerous than the agenda Amit Shah has brought. This questions the identity of states and different regional languages," TRS leader Manne Krishank told IANS.

He also believes that the BJP is adopting dual standards on the language issue.

"In February, the Gujarat government took a decision that all sign boards should be in Gujarati. The government of India ruled by the BJP is pushing states that they should practice Hindi, whereas Gujarat is talking about Gujarati. Instead of preaching states down south, they should start from Gujarat if they really believe in practicing what the preach. Let them start from Gujarat," said Krishank, who is the convenor of the social media wing of the TRS and also chairman of the Telangana State Mineral Development Corporation (TSMD).

"I mean, they want to somehow take control of the region and therefore they are using language now. But I think India is mature enough to understand this dubious politics of region, religion and now again language. This is essentially to establish their dominance," said senior Congress leader Dasoju Sravan Kumar.

He believes there is no language problem in almost the entire south India.

"You don't see language problems, particularly in the context of Telangana, where there are people who speak Urdu and Hindi. There are people who come from all over India -- Gujaratis, Parsis, Rajasthanis, Tamilians, Malayalis and others.

Telangana is like a mini-India where people come from various religions, regions and languages. Per se, this kind of Hindi enforcement by the government of India will only boomerang and Telangana will strongly extend the rebuttal," said Sravan Kumar, who is a national spokesman of the Congress.

"Language is part of the DNA. How can my DNA be changed just because Amit Shah enforces something? Everybody speaks their mother tongue based on culture, history and traditions. And you suddenly come and say you should speak in Hindi. First you change Gujaratis, and then come to us," added the Congress leader.

He reminded Amit Shah that there is no single language of India. There are several languages of India and linguistic diversity demands equal treatment of all.

The former member of legislative council observed that promoting a language that advantages one set of Indians over others is a recipe for division over diversity.

"It's my choice. Let me speak what I want to speak. Why are you forcing me to speak Hindi? It makes no sense. If somebody wants to learn, they are anyway learning. These days there is so much awareness.

"Tamilians are also learning Hindi if they like and if they think that it helps them in business. Language is not a national identity. Language is a medium of communication," said Sravan Kumar, who also served as assistant professor in human resource management at the Institute of Public Enterprise.

"If you go to Gujarat, how many people speak Hindi there? They speak Gujarati. How many people in Rajasthan speak Hindi? They speak Rajasthani. In Maharashtra they speak Marathi. Language enforcement is essentially some kind of expansionist thinking, imperialist thinking. This is our language and all should practice it. This is a sort of tyrannical and dictatorial tendency," he said.

Krishank is of the view that the talk of Hindi as alternative language to English is BJP's style of politics.

"First food, then dress and now language. We have seen it in Karnataka. Hijab, Hilal and now Hindi. They are doing triple H politics," he remarked.

"Someone from Bihar speaks one Hindi, someone from Uttar Pradesh speaks another Hindi. We in Hyderabad speak Deccani which is a different dialect from Hindi. If their ?nahin' is ?na' for someone, it is ?nakko' for me. It's ?Bhao' in Maharashtra and it's ?Bhai' in another place.

"More than necessity or anything, comfort level has to be seen. For instance, when Nirmala Sitharaman speaks in Parliament in English, it is understood. We appreciate that she is a good orator, but when she speaks Hindi, she makes so many mistakes. It looks as if she is speaking some other language. This is how it is.

"If tomorrow a Hyderabadi goes and speaks, it will be totally different. In Bollywood movies, Hyderabadi Hindi is shown for comedians. What they are trying to do is mere politics. Imposition of politics through language," Krishank said.

He believes that it also matters with whom one is communicating.

"If we are visiting another state, whom we are communicating with? If I am communicating with an auto rickshaw driver it is different, but what if I am going for a meeting of corporate heads. Are they going to make it mandatory for every corporate industry to work in Hindi? If I am going to an MNC in Mumbai to work, will I go and give an interview to the MD in Hindi," he asked.